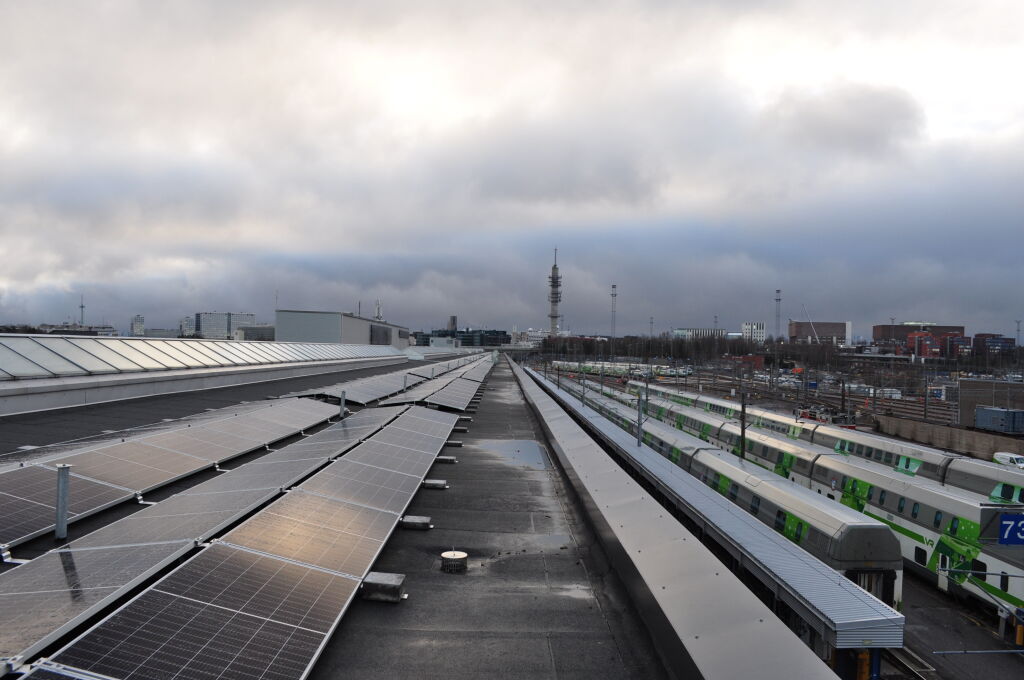 The solar power plant has been built at the depot on the roof of Pendolino hall, Photo Antti Lehmuskoski

VR Group has made its opening move in its own energy production. A solar power plant has been installed in the Helsinki depot and by using the energy produced by it, trains can in the future be maintained more environmentally friendly. The solar power plant deployed in late 2020 is one of the largest in Finland with a rated output of 928 kWp. The solar power system was procured as a cooperative effort of VR Group’s property unit and its subsidiary VR FleetCare that maintains the rolling stock.

The solar power plant has been built at the depot on the roof of Pendolino hall. The power plant consists of 2,264 solar panels and is one of the largest plants in Finland. The amount of electricity produced in a year is equal to the electricity consumption of about 40 electrically heated detached houses, or alternatively, you could use the same amount of energy to drive an electric car about 100 times around the globe. The electricity obtained from the power plant is directed to the maintenance of Pendolino trains and it covers about 25% of the hall’s annual need for electricity. On a sunny day, the power plant’s output exceeds the consumption of the hall, in which case the production is utilised elsewhere in the train depot.

Deploying solar energy is part of VR FleetCare’s more extensive energy efficiency project. The project includes, for example, examining defrosting solutions that use less water and the optimisiation of the energy efficiency of our own operations.

“Pursuant to our vision, we are on a journey to become the best in the world. In addition to the particularly important environmental values, building a solar power plant is also a financially profitable project for us. After a one-time investment, the energy produced with the plant is practically free.  In the longer term, the total annual radiation of the sun varies only a little, which means that even with the investment cost, the price of the energy produced remains locked far into the future,” Juha Ohvo, Chief Security Officer at VR FleetCare, says.

The aim is to increase the Group’s own energy production

Rail traffic plays a key role when the aim is to combat climate change. To start with, rail traffic produces lower emissions and consumes less energy than other modes of traffic. The VR traffic has for a long time and to a large extent used electricity produced with renewable energy.  Even though travelling by train is carbon neutral, we are committed to doing even more for the environment.

“It was interesting to lead the first solar power project that was realised for VR Group, and for the maintenance company VR FleetCare, in particular. The solar power plant is one of the flagship projects of our responsibility programme and increasing renewable energy is also in line with Finland’s energy and climate objectives,” says Martti Jalkanen who is the energy expert and maintenance manager of the site and who acted as a project manager in the plan project. In the future, solar power systems could also be built elsewhere in the VR Group properties, since there is plenty of unutilised roof surface. We have increased the use of renewable energy in the properties by switching from oil heating to geothermal heat at many sites. The use of heat pumps continues to have significant potential,” Jalkanen continues.

The solar power plant in the Helsinki depot was built by Solnet Finland, which has been the supplier in many large-scale power plant projects.

“It is great that big operators are showing the way in the production of renewable energy. We also want to thank VR Group for their excellent cooperation during the project. The management of the project was professional from start to finish and our objective of shared success was realised well,” says Veli-Matti Heimonen.

Heimonen continues: “It is also excellent that, in the system design, VR paid special attention to safety. The solar power plant is equipped with automation and current optimisers that ensure that the voltage of the system can be decreased to a safe level even from the roof, if necessary. This was also the request of the rescue department when the system was being designed.”